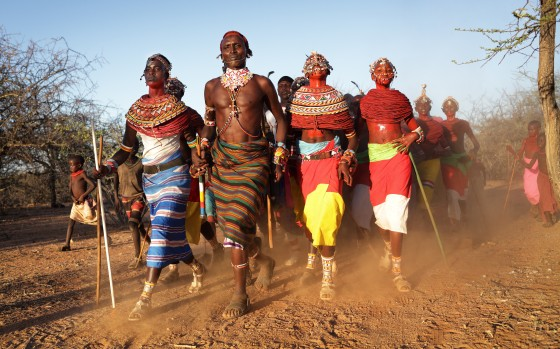 North 268km 6-hour drive.
We shall pass by beautiful Pineapple, Coffee, Tea, and Maize plantations along the highway, and if weather conditions permit, we shall be able to see the peaks of Mount Kenya from a distance.
Overnight: Isiolo, Bomen Hotel

Day 2, Rendille Tribe
Explore the Rendile Tribe Community in Isiolo area.
Rendille Tribe were forced to migrate southwards into Kenya due to frequent conflicts with the Oromo tribe (from Ethiopia) over pasture and water for their animals. The Rendile people living in the northern and less dry part of the region have had a good relationship with their Samburu neighbors where intermarriage with the Samburu has led to the emergence of a hybrid culture.
Overnight: Rendille, Village Camping

Day 3, Isiolo – Samburu
North 32km drive. Visit Samburu Tribe Village where we will have made prior arrangements. Samburu Tribe Culture & Beadwork...
The Samburu are semi-nomadic pastoralists who herd cattle, camel, goats & sheep which are of the utmost importance to the Samburu way of life.
The Samburu live in groups of about five to ten families where men look after the cattle and are responsible for the safety of the tribe.
Overnight: Samburu, Umoja Campsite

Day 6, Marsabit – Loyangalani
Northwest 356km 7-hour drive to Loyangalani.
Loiyangalani is a small town located on the southeastern coast of Lake Turkana in Kenya. The town has 1000 inhabitants (1999 census). Loiyangalani means "a place of many trees" in the native Samburu tongue. It is home to the Turkana people and was founded near a freshwater spring in the 1960s where the El Molo people live. Its main industries include fishing, tourism, and gold panning. It is a popular tourist destination in Northern Kenya, as are the surrounding El Molo and Turkana villages.
Overnight: Loiyangalani Palm Shade Resort & Campground

Day 8, Loyangalani - Lake Turkana
North 5-hour drive to Lake Turkana & visit Turkana Tribe.
The Turkana are a Nilotic people native to the Turkana County in northwest Kenya, a semi-arid climate region bordering Lake Turkana in the east, Pokot, Rendille, and Samburu people to the south, Uganda to the west, and South Sudan and Ethiopia to the north. They refer to their land as Turkan.
Overnight: Lake Turkana, Camping

Day 11, Loyangalani – Marala
South 6-hour drive to Maralal.
Maralal is a small hillside market town in northern Kenya, lying east of the Loroghi Plateau within Samburu County, of which it is the capital. It is the administrative headquarters of Samburu county.
Overnight: Maralal, Sungura Boutique Hotels

Day 14, West Pokot
West Pokot County is currently inhabited by several communities i.e. the larger Pokot, and the minority Cherangany/Sengwer who inhabit the Cherangany area. The Pokot community has one of the unique, richest cultures in Kenya if not the world; the most authentic and unexploited.
Cultural activities include Sapana (men's rite of passage to adulthood), Kidong’a (a traditional dance by all age sets every evening), and circumcision ceremonies.
Overnight: West Pokot, Local Hotel

Day 15, West Pokot – Lokichar
Northeast 3-hours’ drive to Lokichar & visit Turkana Tribe.
Lokichar Tribe is part of the Nilotic Tribes and is regarded as the third largest pastoralist community in Kenya, after the Kalenjin and Luo, being slightly more numerous than the Maasai. Turkana tribesmen standing Turkana-style, on the shores of Lake Turkana. The Turkana originated from the Karamojong region of northeastern Uganda.
Overnight: Lokichar, Camping

Day 17, Lodwar
Begin your first day with a tour around Lodwar Town. Visit the Catholic Diocese of Lodwar where you will see a huge sculpture that resembles the Christ the Redeemer statue in Rio de Janeiro. The Catholic church here named it the Jubilee Shrine; however, it has become a popular tourist attraction and a sanctuary of the people of Lodwar town who have nick-named it Rio. The views from the top are spectacular. You can see the vastness of Turkana including River Turkwel and the Lodwar airstrip. The tour should take you about 2 hours which includes walking to the top where the statue is located. Touring the church is free of charge.
Overnight Lodwar: Sandfields Lodwar Camp

Day 19, Turkana Village and Culture @ Lodwar
The last day of your trip should include a visit to a village at the shores of the Lake Turkana - Fergusson Island. A visit to this village comes highly recommended. You will learn about the fishing community, see the way of life and the culture of the people of Turkana. The Turkana people have a rich traditional culture that they practice to date. They inhabit one of the most hostile environments on earth in terms of weather. Turkana is a semi-arid region that is full of volcanic rocks and sandy plains. The temperatures here can get to as hot as 45 degrees and rainfall in this area is scarce. Their villages stand out, as they live in huts made of wood and covered with animal skins and reeds.
Overnight Lodwar: Sandfields Lodwar Camp

Day 22, Lake Victoria
Boat Excursion on Lake Victoria, visit Fish Market...
Lake Victoria Basin is one of East Africa’s most prominent landmarks. It covers a total area of 68,800 sq. km [km²] and with a maximum depth of 80 m, it is relatively shallow. Shared by Tanzania, Kenya, and Uganda, the lake was known to locals long before Speke’s discovery.
Overnight: Kisumu, Mamba Village Accommodation in Room

Day 23, Kisumu – Nairobi
Southeast 6-hours 357km to Nairobi.
This terrific place within a very secure gated community is one of the friendliest accommodation options in town, and whether you camp out back, cozy up in the dorms or splurge on your own cabin, you’ll end up huddled around the fire at night, swapping travel stories and dining on home-cooked meals (from KSh500) with fellow travelers.
It's off Langata Rd. To get here, take matatu 126 (to Galeria) or 111 (Karen Shopping Center), then change to a Karen matatu and ask to be let off at St Helen's Lane.
Overnight: Nairobi, Milimani Backpackers & Safari Center

Day 26, Tsavo West National Park - Tsavo East National Park
Northeast 202km 4-hour drive to Tsavo East National Park.
The sight of dust-red elephant wallowing, rolling and spraying each other with the midnight blue waters of palm-shaded Galana River is one of the most evocative images in Africa. This, along with the 300-kilometer-long Yatta Plateau, the longest lava flow in the world, make for an adventure unlike any other in the Tsavo East. The park forms the largest protected area in Kenya and is home to most of the larger mammals, vast herds of dust –red elephant, Rhino, buffalo, lion, leopard, pods of hippo, crocodile, waterbucks, lesser Kudu, gerenuk and the prolific bird life features 500 recorded species.
Overnight: Tsavo East National Park, Campsite