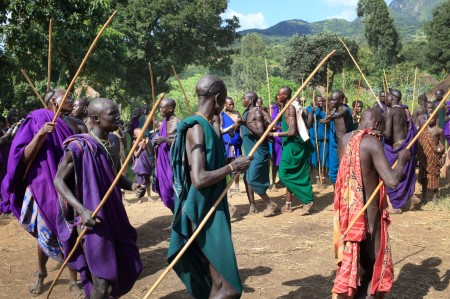 The trip was fortunately spiced with Suris traditional activities like donga stick fighting and a wedding. There were two donga duels and one wedding which the locals call 'welolo'. Therefore, our client saw three of them. One of the two dongas was bigger than the other. Beside these big events, he also saw a blood drinking and a cow horn bending, which are among the practices of Surma community.

Morning family activities were also really fascinating that showed us the lives of the locals. Grinding, cooking porridge and pumpkin, tanning and decorating cow skins, and making calabash from a tree fruit were some of the activities. He was so happy to see all these in one morning at just one village by the campsite. He had the chance to take part in Suris farmland preparation. he helped the locals in pickaxing the ground and spading the soil. The Suris were interested to see him work and sweat like them. it was a fun time. There was local beer drinking at the farm that showed us two people sharing by sipping together at the same time from one calabash. Sometimes traditions of nomads could be exemplary for most of us who are considering ourselves better but suffering from grid. It is a paradox.

After finishing our stay around Kibish, we drove straight to tum to see the Saturday market of Dizis. It was nice. We then drove back to Koka on the same day to have two nights there. He visited early in the morning the cattle places nearby in addition to other photo shootings.

Finally, his plan was to pass two nights in d/zeit. Unfortunately, he was sick the night before and his sickness got worse on the way which forced him to cancel his plan and see a doctor. I drove him to Korea hospital in Addis where he tested positive for various bacteria that was suspected to be from food and water. He took medicines for that and the following day he was by far better. We went again in the morning of the next day to the hospital to know what type of bacteria he had, but for that, culture should have been done. That normally takes two or so days.

He and I didn't have to take a police escort from Dima to Kibish and on the way back. We safely drove both ways alone.