Two couples of French nationalities, of whom one of the couples had already taken a trip to virtually the same area some years ago, stayed 22 days in north Ethiopia to experience a wonderful time by visiting and attending very important sites, religious services and ceremonies, and also local markets. Testing exotic cuisine and drinks and interacting with the locals were exciting. 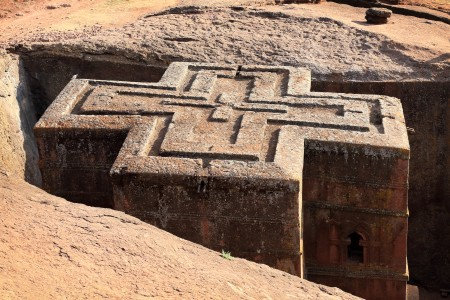 To mention just a few, the big markets on the 2nd and 3rd days of Senbete and Bati, that attract different ethnic people like Amharas, Oromos, and Afars were one of the highlights. They are big and colourful where local produce and animals are brought for sale. We of course drove to some points on the way to Ankober on the 1st day and saw different aquatic birds. The road has been terrible and under construction. We had to wait many times until we could pass by the construction workers, because there were trucks loading and unloading gravel and stuff and transporting. They were picking massive cloud of dust which made driving too difficult.

The stay of the 3rd night was at Lago Lodge, which is located just by the beautiful Lake Hayek, where one can find various species of water birds. We had fresh tilapia fish for dinner which is different from what our guests have at home. The next morning was driving to Lalibela where we had three nights and visited the 11 churches, and the next early morning was driving up to the Asheten Mariam mount where we could see down the stunning views from and a church there.

Having wrapped up the visit in Lalibela, we drove down to Sekota for an overnight for the next day drive to Mekele. After reaching Sekota and securing our hotel rooms, we immediately went to visit Wukro Meskel kiristos, a rock hewn church predating the Lalibela town churches. There, coincidently, was a festivity organized for Saint Michel’s annual celebration. There were a huge number of priests and other local people wining and dining. We were invited to join them and treated to local homemade beers, (Tela,) and Injera, Ethiopians staple, with different fasting stews. The people inside the house, where the banquet was taking place, were bewildered by the appearance of foreigners out of the blue. However, they then became settled down and were all friendly to make our guests comfortable. What a wonderful time! What an authentic rural area festivity! What welcoming people! What a coincidence to be there on such an occasion! It is too difficult to explain the atmosphere unless one is physically present there.

The next morning was to Mekele via Samrie with many stops to visit local houses and see cooking and baking Injera. Hubert with his travel companions had seen making injera in Lalibela as well. Sceneries on the way to Mekele were also amazing to our clients.
Our guests went to Dalol from Mekele for two days where they also had a unique experience.

After their return, we headed to to Hawzein. On our way to Hawzein, they visited Abreha We-Atsbeha. The next day was climbing up Mariam Korkor and other churches. We were lucky to be on Wednesday in Hawzein when a market day of Tigrians is. It was an addition. Because our guests preferred one more night in Hawzein, we stayed there and drove to another church the next day. Not to visit the church, but just to enjoy the surrounding gorgeous landscapes on another route and visit villages. Another awesome day. 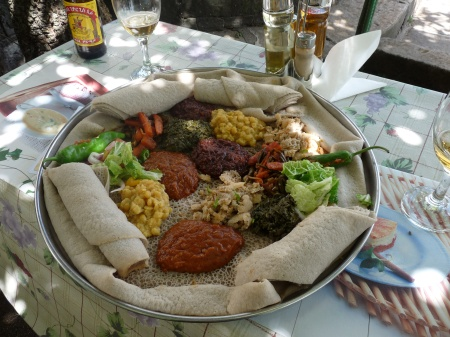 After Hawzein, we drove to Adwa and visited Yeha on the same day. The next days were a bit challenging since there was a big pilgrimage to Axum. We had to wait long lines for police check up en route to Axum. As we were driving back and forth from Adwa, we had to pass the check points two times, once on the eve and the other on the main festival day. On top of that, it was not possible to drive to the church and people had to walk from the outskirts of the city. However, it was nice joining the locals adorned with their traditional white clothes while flocking to Axum Tsion church...

In addition to what were briefly described above, it was a good time for Hubert and friends to be here during harvest time and have the chance of seeing locals on their fields collecting their crops and threshing. Attending harvesting places and being treated to local beers and ethnic food on their fields and in their homes were great experiences. Interestingly, at a harvest in Tigray, there was a folk singer singing and playing his traditional music instrument encouraging the people working there. It was great to see that.

Since the plan was touring counterclockwise, we then had to proceed to Debark and Bahir Dar for the other part of the itinerary. Our guests skipped Semien Mountains and stayed only one night in Debark to have two nights in B/Dar, instead of one night as was previously planned. From Bahir Dar, we went for Blue Nile falls on arrival day though it was not in our plan. Of course, monasteries on lake Tana the next day.

We then drove to Finote Selam the next morning to have a night there rather than in D/Markos. Although we had time to arrive in D/Markos in good time, we decided to stay in that city because there is a good hotel with good rooms and a restaurant for fair prices. The city is not that crowded and has a good feeling of an urban and village combination. Before living for Addis, our guests had a short time to see the mass at a nearby church. There was an annual ceremony celebrating St. Saviour. It was a tremendous event.
To conclude, the trip overall went without any problem and guests expressed their satisfactions to me. Having said that, Hurbert was a bit dissatisfied with the ceremony in Axum because the religious part was reduced, and more time was given for long speeches that tourists couldn’t understand. He felt that the ceremony he saw a few years ago was more attractive.